“Fail Fast” is a tenet of some management methodologies (eg: Agile) that basically involves swiftly identifying when a project or sub-project is not working, giving up, and moving on. I like the idea because I hate wasting my time. Unfortunately I am not great with the notion of failing in general (for myself). But I guess sometimes you’ve just gotta call time.

We’ve been in Zurich for four months now and I’ve clocked up what I’d deem as a few failures already. So with a mind to “fail fast” and move on, I’m outlining them here.

Germanfail: I haven’t loved my German classes. I picked one of the cheapest courses I could find as I’m generally a believer in trying the budget option first because sometimes it’s great and why spend more (eg: lots of Supermarket own-brand groceries), plus I think it’s easier to justify paying extra for better quality than it is to “shift down” once you’ve tried the so-priced best.

I’ve found these classes a disappointment on a few levels.

SOLUTION: I’ve taken matters into my own hands and found a class that seems a lot more suited to me. The new school is called Bellingua and says it’s for “committed, fast learners”. According to the website, 75% of its students hold a uni degree so I’m assuming they won’t be nearly so mystified by what I consider fairly basic language exercises and grammar. I start on Monday.

WHY IT’S STILL A FAIL However, today in my normal class (I plan to do both classes concurrently for a bit) I was surprised to discover that most of the other students are continuing to the second unit in the same school with that same teacher. Am I the asshole? I also feel sad not to have successfuly made friends with any of the students (again, maybe because I am the asshole?). I mean, I like them, we say hello and have had a few good conversations, but there’s nobody I would exactly seek out to hang with. Fail.

SOLUTION: This one is trickier to solve. We can’t afford a cleaner right now because I’m going to be spending extra money on the German classes (see above). But actually writing this out has made me realise that my main issue is a bit of disorganisation and my hatred (irrational?) of cleaning.

WHY IT’S STILL A FAIL: If I’m completely honest, housewifefail stems from the fact that… deep breath… I’m finding it extremely hard to deal with my change in status from roughly-equal-working-person-in-a-partnership-involving-small-child to housewife. I don’t think it’s fair of me not to do the cleaning and run the house since I’m not earning money (except from some freelancing, which will also be somewhat curtailed by the increased German classes, see above) and that was basically the deal we struck. Plus, although I hate cleaning, I love it when the house is clean and it depresses me to see it messy, dusty and dirty so I’m stuck between a rock and a hard place. I think I need to learn to love it. Or at least accept cleaning as part of my “job” now. Possibly if I schedule it better, it won’t seem so hateful and overwhelming?

Friendfail: Acquiring friends here feels like it’s moving at a glacial pace. I was prepared for this but it doesn’t change the fact that it feels very shitty not to have “critical mass” of pals to hook up with yet. And, while I’m not sure quite what I could have done differently, I can only blame myself. I haven’t put myself out there enough, haven’t tried hard enough, haven’t doggedly followed up the small friendship leads I’ve had. So I’m a bit of a proud, aloof, shy adult sometimes… I don’t wanna run after the popular kids in the playground begging for scraps. But I’m sad to say that I feel the housewifefail and resentment would be much mitigaged if I had a few more local cronies. And, of course, the fact that I haven’t bonded with any of my German classmates is another fail on this front.

SOLUTION: Try again. Try harder. Do things differently (?) Well, maybe the new German class will deliver on all fronts – giving me a new set of people to befriend, a new sense of purpose and identity, plus, of course, winging me on my way to being able to make friends with native-speakers and thereby opening up whole new avenues of potential buddies!

WHY IT’s STILL A FAIL: Because I feel like shit right now and the house is a mess. Thanks for reading! 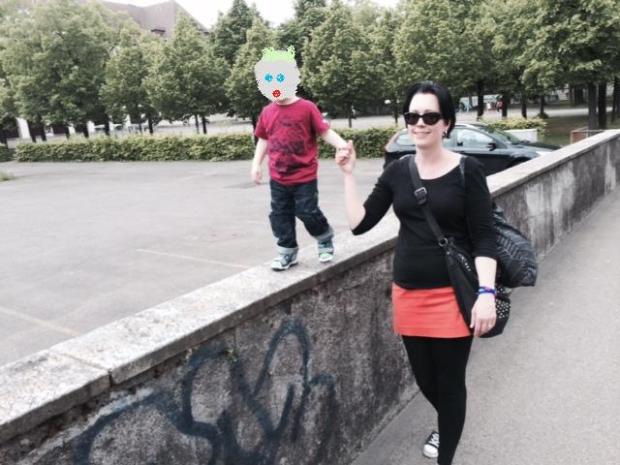 I’ve had a bit of rare free time this week and it’s meant I’ve been contemplating what do do with myself, occupation-wise, now we’ve landed and (pretty much) settled in to our new lives in Switzerland.

I think if I wanted to make this blog really huge, I’d make it a mum blog.  The genre has become super popular and the good ones are excellent. But I don’t know if I want to hang my shingle on Clairevetica alone. Besides, the “mum blog” is not really me. I don’t feel like I’ve got a lot to say to the unknown masses about mothering or parenthood. I enjoy it, but it’s personal.  I’m happy to give advice and share experiences with friends, but I don’t need to tell the world about it. That said, I’m sure I’ll write a few posts on parenthood and my whole experience is obviously coloured by the fact that I’m here with my son and husband.

When I became a mum, particularly when I was on maternity leave, people would make suggestions like: why don’t you write a book about motherhood? You could look for work on a parenting magazine*! Why not write kids books? Huh? Just because I’ve given birth doesn’t mean I’m automatically interested in all things child-related. I mean, sure, I am interested in those things as they affect me. But that massive shift in focus to a single focus?… nuh-uh. Sorry. Would people make the same suggestions to my husband? I doubt it.

So while I love my son dearly and I mostly enjoy being a parent, it’s just Not. My. Main. Thing. It feels a bit weird to write that, actually. Because it sort of is my main thing – it probably takes up the biggest portion of my time and a fair chunk of my mental space. Especially since I had to give up my job to move here (although I’ve done and am doing a fair bit of freelancing). But, at the risk of sounding like an asshole, as far as kids go, I’m mostly only interested in my own (and my friends’ children, I am not a complete monster). Besides, my son will grow up. He’s already growing up! Why would I want to remain stuck in babyland?

When my parents were here recently, my dad made a rather ill-advised comment about how I should perhaps become an actor, or a teacher! Why would I throw away 20 years of work experience in an industry I enjoy to start from scratch? Again, would he make such a suggestion to my husband?  I do try to take this sort of comment positively – like I’m so talented and flexible, I could do anything I set my mind to (!) –  and I know my father, and the baby-book suggesters, were not intending to be rude. But it’s still rather perplexing. Like my previous adult life’s achievements don’t really rate.

Anyway. So what life-occupations am I looking for?  Well, without particularly meaning to, I have been pressing the flesh a bit here. I’ve had meetings and discussions with a few people running their own writing/editing/marketing businesses from Zurich, and the possibility of sending work my way has been aired. Then they come back and ask me stuff like: what are my strengths, how much do I want to be paid etc. and I’m a bit stumped. So here’s the best working-draft I can come up with, for the purposes of clarifying it in my own mind if nothing else:

I want to do writing and/or editing and/or work on projects that are interesting to me. What I find interesting is a piece of work that I can have some autonomy on, and that I can help shape the direction of. I can do freelance bits and pieces but for longer-term/ in general, I want some “skin in the game” or else it doesn’t really hold my attention. I want pieces of work that finish and have a tangible output that I can point to and feel proud of. These jobs could be in the context of an ongoing role/project or discrete pieces of work.  I am happy to work hard, but I don’t like wasted effort. I don’t expect to become a millionare or I wouldn’t be in publishing. But I need to get paid a fair and reasonable amount. You’d be surprised how long research, picture sourcing and thinking can take and no one wants to pay for those non-output aspects of the job.

I don’t think I’m particularly wild to start my own business. Because: in what? I enjoy collaborating with people – I think two heads are usually better than one. If you find someone you really work well with, it’s such a joy and I find it extremely motivating. If I had a good idea for a business, and a great partner, I’d do it. But at the moment it’s not something I have a huge yen for. I’d also like to write a novel, but that’s a lot of working on my own. I think I kinda need that spur – that obligation to complete for somebody or with somebody or by somebody.

So I guess that’s it – my non-mum-blog manifesto. Well, if I can have a musing (amusing?) ramble on me own blog, where can I? Shut up.

*Ok so I edited my local NCT mag Tottenham Tots for 18 months. But that was a large editorial project where I did all the layouts myself in InDesign, sourced and wrote stories, sourced and took images, placed ads… a wonderful, satisfying and extremely educational experience!

Badi season has arrived in Zurich! We’ve been to our local outdoor pool, Bad Allenmoos, a couple of times now and it is fantastic. It looks like an Artist’s Impression of the ideal leisure space and it kinda is. So much of Switzerland feels a bit like the 80s and this is no exception. Takes me back to happy childhood memories of swimming in Camberwell Cold Pool (I think CCP has gone now? boo!)

The rest of the complex contains the aforementioned beach volleyball courts, a kids play area with equipment (swings, slide, sandpit etc), a cafe, a kiosk, sun umbrellas and sunloungers to hire, stacks of dressing sheds and a huge expanse of grassy space to spread out on. And it’s 10 minutes’ walk from my house.

Plus there’s no fences around the pools because (I guess) they trust that parents will keep an eye on their kids and that people aren’t idiots. There’s not signs everywhere to say don’t run, don’t fall, don’t shout, don’t this, don’t that. (Well there is one, politely asking those who’ve come from the beach volleyball courts to please rinse off the sand before getting in the pool – using one of several handily provided outdoor showers placed between the footpath and the pool itself). And there’s a couple of no diving pics in the shallow bits but that’s about it.

Bad Allenmoos is the biggest outdoor Badi in Zurich. It’s one of 24 indoor and outdoor pools in the city (I think this includes the official lake schwimbads). And I have got a Summer Season Pass that gives me free entry to all of ’em* from 10 May – 21 September. Awesome. It’s gonna be a summer of swim!

*Except the Dolder Grand I think.