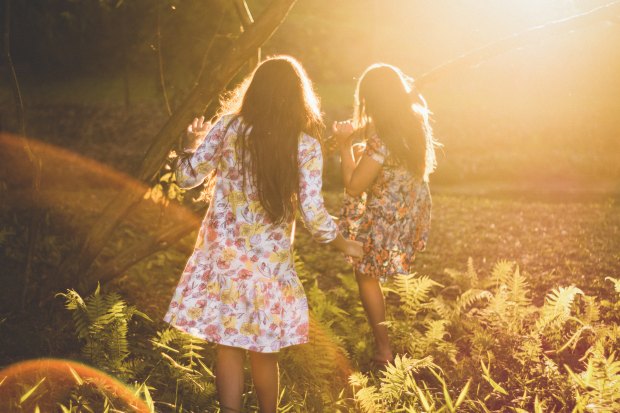 Photo by Bruno Nascimento on Unsplash

the minutiae of a world

in the cracks of a bluestone wall

where sparkling bits of gravel

and sand and tiny rocks

would nestle and we’d

arranging them in little piles

the hollows in the ground behind

curves of tree roots and

leaves and pollen from

our shared and sacred world

our act of mutual dreaming

no one else would understand

how we looked so closely

the whorls in a tree and

a place where we conjured

our own folklore of

kids with dusty feet or

puddles when it rained and

but not hidden because

only our eyes could see

what we invented there

Interesting thing: The CabriO build cost around CHF30 million, but the idea was so popular the funding rounds were oversubscribed, attracting around CHF7 million alone from local donations.

The canton of Nidwalden is located right in the centre of Switzerland. Something I only just realised looking Nidwalden up on Wikipedia for this entry! It seems fitting, then, that our last major outing with the in-laws before they return to Australia was here – in the heart of Switzerland.

Our plan was to ride the open-top, double-decker CabriO cable car from cantonal capital city Stans, up to the peak of the Stanserhorn mountain. It was a good plan and the weather was lovely.

The Stanserhorn CabriO is the first and only cable car of its kind in the world so far. The original 2-stage cable car was struck by lightning in the 1970s, causing much destruction and burning down the hotel at the top. It was replaced at the time but, as 2010 rolled around, they were looking to upgrade and this deluxe, 90% Swiss-made model with its rather impressive USP opened in 2012.

First you have to catch a creaking cogwheel funicular railway up the bottom part of the mountain. This ‘oldtimer’ celebrates its 125th birthday in 2018 and, due to its age is quite tiny – with capacity for only 40 people. Because we’d come on a busy Sunday, this meant a bit of waiting around, which was rather frustrating. They have a slightly odd system of time-slot tickets that didn’t quite work as well as it should, but is necessary given the small size of the cogwheel carriages (the Cabrio has capacity for 30 on top, 60 below). Chatting to the train driver on the way back down, he said they’d experimented with various ticketing methods and this was the one which worked best. My advice would be to pick a less-busy, ie: non-weekend, day if possible to avoid some of the kerfuffle.

However, it’s worth putting up with a bit of potential annoyance, because the view at the top is just superb. You’d think I might be sick of these alpine vistas by now, but each one is different. From the Stanserhorn’s highest peak (1,898 meters above sea level), you could see so many other mountaintops: Titlis, Santis, the Eiger, Monch and Jungfrau, and a bunch of others besides. Then, if you look down, there’s the stunning Lake Lucerne below, as well as chocolate-box scenes of green fields and wooden farmhouses studded with cows and goats. Just so, so pretty.

A QUESTION FOR READERS: Last time I did the photos through the post, this time I’ve gone back to a slideshow. Which do you prefer?

Cantons visited / to go so far.

*I haven’t written this up yet!

Interesting thing: Zermatt is car-free, there’s only small, commercial electrical vehicles in the town (taxis, delivery vans) to prevent air pollution obscuring the views! You could really notice the fresh air and the lack of traffic noise was lovely.

Special guests: my parents-in-law and sister-in-law visiting from Australia, and my aunt-in-law from Scotland

Valais is one of the farthest-away cantons from Zurich. It’s around 3.5 hours by train to the town of Zermatt, located at the end of the Mattertal valley and loomed over by the majestic Matterhorn mountain. So, since we had international visitors and we figured there was some pretty spectacular stuff to see, we decided to spend four nights in this alp-studded canton in the southwest of Switzerland bordering Italy and France. I’m so glad we did.

Zermatt is 1,620 metres above sea level and surrounded by snow-capped peaks. However, we spent our first couple of days here feeling rather teased by its most famous inhabitant. Possibly the world’s most recognisable mountain was acting coy – swathed in clouds, shrouded in fog, we only caught glimpses here and there. It didn’t stop us enjoying ourselves though. 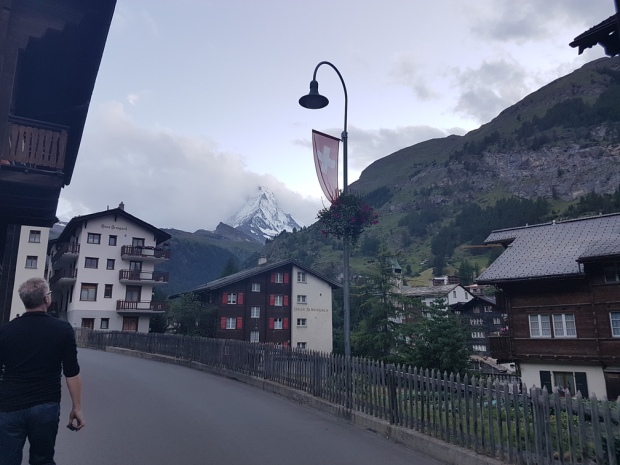 First glimpse of the Matterhorn

Zermatt itself is a small alpine town that felt large since it was chock-a-block with tourists at this time of year: the first weekend of the official summer season. That said, I can only imagine how much more packed it would be in winter when all the slopes are open and everyone is padded out and weighed down with snow-gear and all the trappings! (fun fact – Zermatt’s permanent population of around 6,000 doubles, triples or even quadruples in the tourist seasons).

The town and surrounding hamlets looked very pretty for the first weekend of July – full of all the requisite wooden chalets, bright bunches of flowers flowing over balconies, grey-green glacial rivers and lakes and, of course, the stunning, if rather shy-at-first Alps.

Zermatt from our flower-decked terrace

Our first fully day (Saturday) coincided with the annual Zermatt marathon. Since I’ve recently taken up running (eek!) this was inspiring/intimidating in equal measure. Billed as one of the most gruelling marathons in Europe, the route ranges up and down an altitude of 1,800 metres over its 42 kilometres. Watching the 2,500-odd runners throwing themselves down the rocky paths as we walked from Sunnegga to the incredibly lovely Chez Vrony for our leisurely lunch, you can see how the race earned its tough reputation. (I promise not to become a run-bore, but I need to tell you that I was inspired to complete the circuit of the far-more humble Zermatt Parcours the next day!)

Day two, we awoke to more cloud cover, but undaunted and unable to resist a swooping cable car ride, Himself and I took advantage of the built-in babysitters and jumped on the Matterhorn Express cable car/ gondola which takes about 50 minutes to rise around 2km in altitude (!!) to the Matterhorn Glacier Paradise, the highest I think I’ve been on land – 3,883 metres above sea level. From which viewpoint we would have had an amazing view of the elusive Matterhorn, if it hadn’t been a total whiteout.

Day three was due to be our best yet according to the weather reports so we headed off early for the Gornergrat bahn and finally the mountain of mountains revealed itself (himself? herself?). It was certainly worth the wait, in fact, possibly more awe-inspiring for the fact that we’d enjoyed a burlesque of clouds concealing/revealing it for days now.

I had this weird-beautiful moment with an older Swiss-German guy on the train. We had a short conversation as we politely shared the window space to take 1 million photos. I said something like “Diese Berge sind sehr schön” (these mountains are so beautiful) and he agreed, adding “Wir Ameisen!” (we’re ants). But, through my momentary misinterpretation, I thought he was saying “Wir atmen” – we breathe… which is also quite apt.

We picked the best place to see it from too, IMHO. Gornergrat is 3,089 metres and from there you’re surrounded by a vista of big guns – around 50 peaks that all clock in at 4,000+ metres (Matterhorn is 4,478 and you can also see Switzerland’s highest mountain, Monte Rosa and its highest peak, Dufourspitze, at 4,634). Plus, you can hike or catch the train down to the impressive Riffelsee lake, in which the Matterhorn is reflected on clear days (and this was one of them, yay!).

Some of the party hiked further, while the rest of us got back on the train to enjoy another gorgeous lunch at Alphitta, this time with the Matterhorn views fully in our favour. There was also a rather superbly situated playground, which my two kids thoroughly enjoyed. 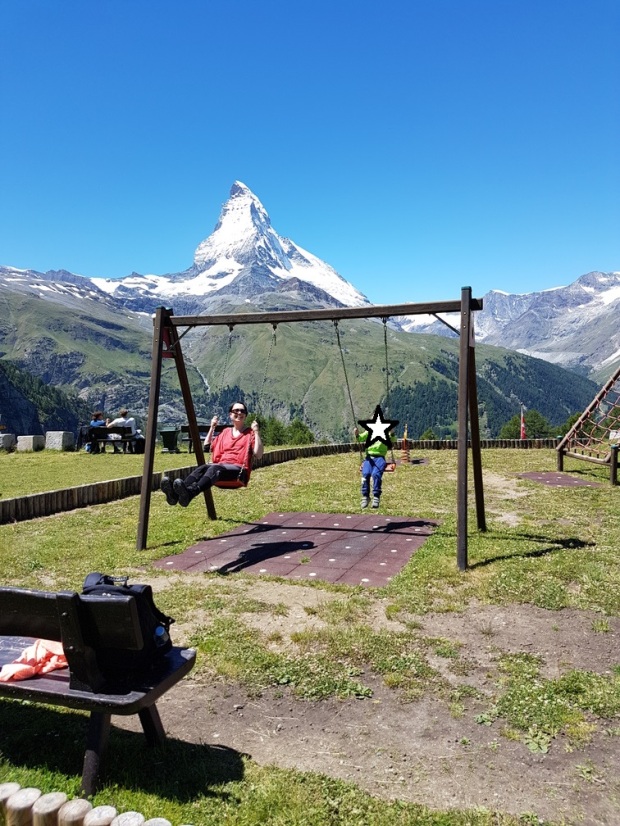 Final day – can’t get enough of those Matterhorn-vista playgrounds! I actually felt I’d have liked to stay in Zermatt longer. Once I finally saw that mountain, I didn’t want to stop looking! It has got its own weather system, little puffs and candy flosses of clouds that float and drape around it in different configurations by the hour. So pretty.

Considering the distance to get there and time spent, Zermatt/ Matterhorn / Valais felt like a real ‘destination’ that did not disappoint. I’m thrilled (and kind of humbled, even) to have seen the Matterhorn in real life. And we breathe … 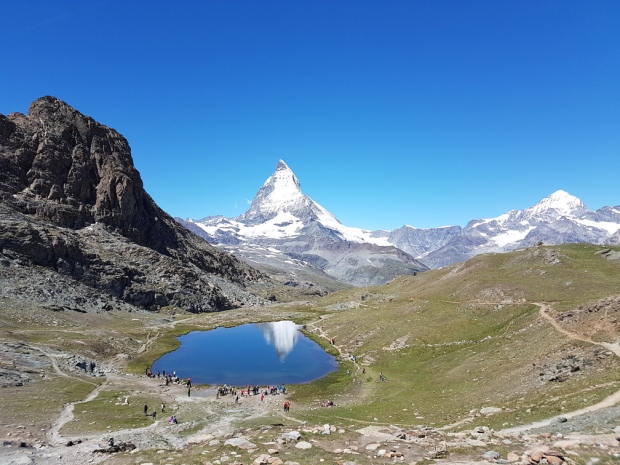 Cantons visited / to go so far.

*I haven’t written this up yet!