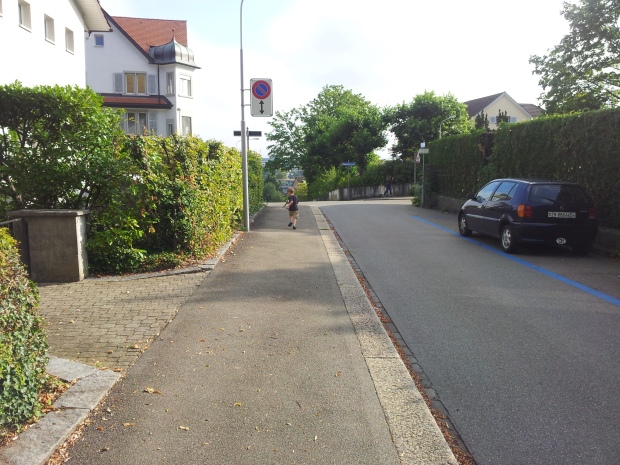 Another successful AirBnb holiday over the weekend in Strasbourg. It’s nice and oddly intimate to stay in someone’s family home. I’m not sure I would be comfortable with letting my space out in this way but I’m very glad others do it and so far, we’ve had some great experiences with AirBnb (what did we ever do before this? I guess we used to do these “farm stay” holidays when I was a kid – or rent a beachhouse with another family).

Being in someone’s house like that got me thinking of other houses I have known, both inside and out, throughout my life. As a child in the Melbourne suburb of Camberwell, I guess we spent a lot of time walking, riding bikes and driving (or being driven) along these streets of our immediate area, so the local houses formed a well-known backdrop to my childhood. As, indeed, did some houses further afield on common routes. (A friend recently wrote a lovely piece on this for the Punt Road Project – also documenting a Melbourne childhood.)

Of course we knew several families in our immediate neighbourhood, where the streets were named alphabetically: Allambie, Bringa, Carramar, Doonkoona, Ellaroo, Fordham, Gowar… Killarra. And sometimes you’d make a new school pal or mum would get chatting to a lady she met waiting at the Doctor’s surgery, or a family we knew would move house. And they would turn out to live, “just around the corner in Doonkoona Avenue…” And then another piece of the puzzle would fall into place. A house with a familar facade would now be populated by an acquaintance. And you’d get to see inside.

In our own street – Killarra Avenue – we got to the stage where we knew about half the families, I guess. From the top of the street down was: Deborah and her deaf parents (their doorbell dimmed the lights); the Tunnel-Joneses, who had those scented Strawberry Shortcake dolls and a climbing frame that became our rocket when we played G-Force; Mrs Dunn, who would always sponsor me for a few bucks in the MS Read-a-thon; The couple across the street with two sets of twins (!), Brian and Mary next door (mostly OK with us climbing the fence to retrieve a cricket ball), the Rileys – a bunch of teenage boys who’d play football on the road; The Mukerjees, whose house smelled like tinned tomatoes inside; the family who owned Jed, a huge rottweiler with a stub tail who was friendly… ish; Lizzie Davis – a girl two years older than me who I got to play with sometimes and whose back garden had two amazing treehouses that we were never allowed to use because they contained redbacks (or maybe she just found it too boring to play in them with a little kid like me) She had bunk beds and older sisters and they taught us how to play Murder In The Dark; Mr and Mrs Papodopulous whose garden was mostly concrete. Andrew, who some guy took a swing at when he went trick or treating one year. And finally Marty – our almost-constant companion – our mums would often share a glass of wine at the end of the day while we continued playing or watching TV.

Thinking about these streets recently, I realised that somewhere in my child’s mind, I felt like I’d be grown up once all the blanks were filled in – once I knew everyone and had been into all the houses in the area. Is that weird?

Extrapolating metaphorically though, I guess finding out who lives in the houses and what’s behind people’s facades – both physical and physiognomical – is the stuff of life. And even a child recognises that (especially a child both as wise and modest as myself!) I’m maybe halfway through my life now. How many houses have I entered? How many people and places do I “know”… Am I grown up yet?

It’s also, now I think about it, yet another reason why relocating is so fucking difficult and the culture shock can sting so bad – suddenly you really don’t know anyone in the houses. It’s all unfamiliar territory, you’re no longer grounded and there’s no Safety House (another Melbourne childhood thing) on the corner.

Another aspect of this, of course, is seeing my own kids begin to populate their world – our local neighbourhood in Zurich. My eldest is about to start kindergarten – equivalent to starting school in the UK or Australia, in terms of his age and the fact it’s compulsory attendance. There are 20 kids in his class: 10 “five-year-olds” and 10 “six-year-olds” (I think he would have been in a reception class of ~30 kids in London!). And, seeing it’s so small and there are loads of other kindergartens around, I assume all the children must live within spitting distance of the premises, so we’ll probably get to know a few local homes a bit better once friends are made and playdates happen. My son is already such a smart cookie, asking about street names, recognising landmarks and with his favourite things to spot en route to the pool or shops. It’s cool to see him start to put the pieces of his own local puzzle together. My sweet, smart little boy is growing up! When the time comes for him to take his own walk down memory strasse, I hope he’s got as good recollections of his childhood as I have of mine.