Anyone who thinks we don’t have inherent sexism in our language and most of our texts from childhood onwards needs to do this simple experiment. Take the popular children’s book Dear Zoo by Rod Campbell and switch the genders of all the animals to female. And suddenly the characteristics seem way loaded. 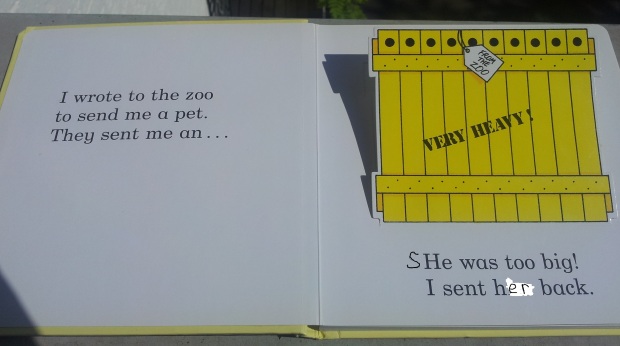 Here’s an interesting Guardian article about gender imbalance in children’s books. And another article about the fact female voices figure far less than male ones in Disney films (yes, even Frozen, which seems mad).

When I think of the films my 5 year old son loves such as Finding Nemo (a dad looks for his son, and aside from one main female character, all the other main speaking parts are male – the irony being that a male clownfish actually TURNS INTO A FEMALE if/when his mate is killed.) Cars (one main female speaking part, the love interest) and Planes (two minor female love interests and a female secondary member of the crew) it does make me despair.

We’ve also recently started watching Teenage Mutant Ninja Turtles, a show I watched regularly in my youth. There’s 4 male turtles, their male mutant-rat ninja master, the male enemy – a Darth Vader style dude named Shredder – and his overlord Krang, his two male offsiders etc. There is one main, strong female – April O’Neil – a journalist, so that’s awesome. But do we really celebrate ONE main chick among NINE male characters? What kind of ratio is that? And how is it anything like real life? I could outline a similar catalogue for Star Wars and everything else but you get my drift. Sigh.

Also everything is Mr Sheen, Mr Muscle, Mr Mower etc. I’ve noticed this, along with the huge gender imbalance in kids cartoons, since I was a child and it always bugged me. I know this is because maleness is seen as “the norm/neutral” (I am not a gender studies expert, so excuse me for not using the proper terminology here) but still.

Going back to my first example. It’s not just that all the animals are male. I find that changing them to female gives the characteristics of the animals – She was too: Big, Tall, Fierce, Scary, Grumpy, Naughty, Jumpy – a whole different dimension that makes me feel uncomfortable in a way I’m not even sure how to articulate. What do you think?