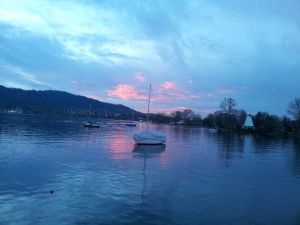 Two weeks in Zurich and we’ve found a lovely flat, checked out a nursery for P, got registered (hoping for B permits but it’s all a mystery/ lottery until the thing arrives in the post), set up cable TV/phone/internet to the new flat, opened a bank account (or rather, many bank accounts but all bundled in together… it’s complicated) and will see about enrolling in German lessons on Tuesday. Phew!

I’ve also paid WAY too much for passport photos and dealt with more bureaucratic annoyingness from HI’s work than I even want to talk about. C’est la vie. Or however you say that in German.

On balance though, living in Zurich is going to be amazing. It’s been great to spend these couple of weeks here just stooging around on the trams, familiarising myself with the city and the lake, checking out some parks and playgrounds with P and getting a handle on the supermarkets etc. Mmm supermarkets.

Have developed an unhealthy addiction to Berliners (vanilla creme or jam-filled donuts) and vacuum-packed “instant” rosti .