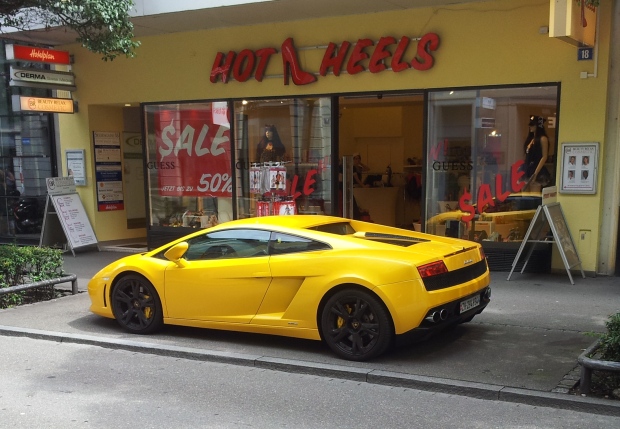 Hot wheels or hot heels… you get what you’re given

Last week, we found out we’re having another boy. I don’t plan on having any more children after this one, so right now I feel a bit disappointed. I was 90% sure it was a girl. Which would have made the perfect little family.

My disappointment in not “achieving” perfection here, and the headline of this blog, takes me back several years to when I used to edit a customer magazine for a semi-luxury car company, the tagline of which was The Pursuit of Perfection (er, not Lamborghini by the way!). The job made me unhappy for many reasons that I won’t detail now. Suffice to say, it was during my employment there that I first sought help for clinical depression. At that time, I was passed to a rather young, freshly qualified and enthusiastic NHS counsellor with pale pink hair who helped me in two valuable ways. One was putting me onto an online Cognative Behavioural Therapy programme (MoodGym) and the other was her “diagnosis” of me as a perfectionist.

Perfection – I scoffed at the time – was something I absolutely did not seek. I’d worked in publishing too long to be an adherent of ‘perfection’ – that way lies missed deadlines, endless do-overs and disappointment. Near enough is good enough: do it well, proof it, fix it, proof it again, sign it off, ship it to print and move on! Bear with me, she said, and take home this document, read it and see what you think. I did and she was right. Perfectionism in psychological terms is not always trying to be “perfect” per se, according to http://www.cci.health.wa.gov.au/ it is:

1. The relentless striving for extremely high standards (for yourself and/or others) that are
personally demanding, in the context of the individual. (Typically, to an outsider the standards are
considered to be unreasonable given the circumstances.)
2. Judging your self-worth based largely on your ability to strive for and achieve such
unrelenting standards.
3. Experiencing negative consequences of setting such demanding standards, yet continuing
to go for them despite the huge cost to you.

I am not going to comment on whether the car company I worked for achieved this goal but for myself, I was glad to recognise and acknowledge these traits and try to work on them. However, like depression, I’ve found perfectionism can rear its head at various times life and screw around with you. And I guess now is one of those times…

I have been thinking about the fact I’m carrying a boy for a few days now and I guess I can only describe it as thus: I feel like people will judge me as though it was a choice I made. “Oh, you wanted a 2-boy family.” When my choice would have been to have one of each. And I know that’s stupid, and selfish and anal and stuff but there you have it. Of course the main thing is he’s healthy and I’m healthy. There are people out there desperate to conceive, or with rafts of other baby- and child-related problems, and I truly am grateful we’re all healthy so I really should shut up. I will love the kid and I will get over this. But if you’ll indulge my wallowing and justifications for a moment or two?

So: I am a girl. And one who enjoys dressing up, shopping and vanity things. And it would have been so nice to have a female child to do this kind of  typical girl stuff with. Plus, in general, when they become adults, women are better at staying in touch, remembering birthdays, helping to tidy up after a dinner party, all that stupid stereotypical shit that perhaps shouldn’t matter but of course it does. (And I know I’m getting about 20 years ahead of myself, but these are some of the conclusions I jump to).

Also, it means I will never have a daughter who has a baby so I can go through the pregnancy with her and tell her what it was like for me, etc.  BUT – this is all a bit silly. Who’s to say that even if I did have a daughter that she would be any of those things? Or that I will “miss out” in any way? For example, I was at a 3 year old’s birthday party the other day and the mother-in-law (MiL) was just lovely and obviously very involved with the family of her son (her only child). In fact she reminded me of my own wonderful MiL (who I know reads this blog, hi Avril!), who has given me some fantastic motherly advice over the years and been very involved with P’s life as well as in the lives of the children of her other son (she also has a daughter, but her daughter has not had children so there’s no guarantees of that “shared motherhood” experience anyway!) . I would hope to do the same for my son’s partners one day. Assuming they have them. Because my son/s might be gay, or not have kids, or be perpetually single, or anything. And that is also fine.

So I guess it kinda comes back to this weird feeling of no choice, or the wrong choice somehow. It’s like – everything else in your life you basically get to decide on (if you’re a privileged WASP like me): where you live, your tertiary education and/or career, if/who you marry, what you wear, the stuff you have – from the car you’re driving to the handbag you carry to how you decorate your home. And while I might not love the fact, it all signifies stuff about you. And I guess I feel like the outside trappings of my life are all fairly well curated. I’m happy with them and the impression that I give off and, yes, I do think about it a fair bit (does that make me a pyscho?!)  But this, well, it’s not my choice – the way it will be reflected on me feels like it doesn’t quite fit. So I feel a bit sad and, if I’m brutally honest, slightly embarrassed? Like people will whisper: “oops, unfortunate, was that on purpose?!” God that’s awful. But that’s why I wanted to write about it – get it out there, see how ridiculous I’m being.

I went online and read a few forums and stuff about this topic. One commenter had a really nice suggestion which was: enjoy your sons and if you feel the urge, just go and buy that frilly dress and donate it to a child in need. I like this idea. Besides, many of my close friends have girls, and I have two nieces. Being “cool Aunty Claire” to them should surely be almost as satisfying! Plus I won’t get the growing-up girl tantrums (when I think how horrible I was to my mum at some points in my life, agh), I won’t have to deal as directly with all the horrid over-sexualisation that’s shoved in girls’ faces as they grow up (although I will make damn sure my boys respect women and join the feminist fight), and selfish, vain old me will never have to “compete” against a fresh, younger version.

I am glad we found out though. I wouldn’t want to deal with these feelings on top of the “baby blues” a few days after the birth. And I know I’ll get over it. But right now, I am a bit sad and, for a perfectionist like me, it’s tough to bid goodbye to what I thought my family “should” be.