There’s this episode of Astro Boy that I always remember. There’s an older boy, Matthew Tennyson, who Astro admires because he’s training to become a space pilot and will be made a captain when he turns 18 in a few days. However, on his birthday, it turns out that Matthew is actually also a robot. Unlike Astro Boy’s parents, the boy’s father had just ‘upgraded’ his body once a month so it looked like he was growing. The boy – now Captain Tennyson – is devastated to find he’s not a real human. 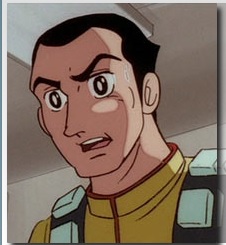 He’s also worried that his Captainship will now be in question, since his crew are all humans. It was, naturally, up to Astro to show him that being a robot was actually pretty cool.

For some reason, that horrible moment of disconnect: realising you are not, in fact, what or who you always believed, really resonated with me. I remember it very clearly. The tall, dark and handsome Cap’n Tennyson looking beseechingly into the huge Japaname child-eyes of Astro for help, guidance and the reassurance that he, too could be loved, even if he was not the person he always thought himself to be.

I guess it’s a good analogy for growing up. Or any sort of major change.

I also remember the scene showing the discarded, last-month’s robot body of the ‘growing boy’ being dispatched into space, spinning off, lifeless, into infinity. Quite a visceral image of how we must, perhaps, literally shuck off our former selves in order to grow and change. But then we often get stung by imposter syndrome!

I just re-watched the episode and it was mostly as I remember. The ‘older boy’ was actually 20 was already a captain. He discovered his robot nature when he spied his beloved father sneaking the ‘corpse’ of his former self into the space-waste chute. Once everything had been worked out, there was also a touching moment when the father (wonderfully named Eldritch Tennyson) explained he only did it because he so wanted a child but couldn’t have one any other way, and how much he loved his son no matter whether he was human or not (understandably this resonated more with me now as a parent, than it probably did when I first saw the episode aged 8!)

What’s the take home? I guess it pays to remember that, as we move, change, grow, and maybe look back at the corpses of our former selves floating, discarded through space, we nonetheless retain in our core the bits that are worthy of love and deserving of respect. And, hopefully, we will also make friends with pointy-haired robot superheroes along the way!
&nbsp