Destination: Zurich (and beyond!)

Interesting thing: You’ll see it spelled Zürich, Zurich and Zuerich, all are correct. Zurich (without the umlaut) is the English/international spelling – easier for the internet and is commonly adopted since it’s a multicultural city with multinational companies as well as institutions such as ETH University that mostly deal in English. Zuerich is the German-non-umlaut way to write it and is often used in web addresses (ü is pronounced ‘ue’). Although a local friend recently mentioned on hearing Nick Cave’s “Hello Zurich” at a concert that I’ve been pronouncing my adopted city name wrong all this time… I guess you can take the girl out of Australia…

What do I say about the canton and city I’ve called my home for nearly four years now? Four years is a long time. Thinking back, while I lived in the cities of Sydney and London for longer, our flat in Zurich is probably the longest house I’ve lived in continuously since becoming an adult. I feel pretty at home here, although various circumstances mean it’s still sometimes hard to feel settled.

Despite hitting an average of one Swiss canton every fortnight throughout the year for #26Cantons52Weeks, the bulk of my time has been spent in good old Zuri. We had a great summer with lovely weather, lots of swimming and what now feels like a regular influx of visitors from abroad – always a pleasure and a great excuse to explore further afield.

I have travelled a fair bit in the canton of Zurich too – discovering new things, visiting friends who live either side of the Zurisee (Lake Zurich) and in the hinterland of Winterthur, Dietlikon etc. But I guess my main focus has been on the canton’s capital city and my small corner of it.

I went in the Limmatschwimmen for the second year in a row. I wrote a Love letter to Zurich in a local publication. And, aside from #26Cantons52Weeks and other writing successes, perhaps my biggest, unexpected personal achievement this year has been that I started running in summer, which has been kind of a revelation and saver-of-my-sanity. For me, this culminated in participating in the annual Zurich Silvesterlauf winter 10km run. From the name, the Silvesterlauf should be today (New Year’s Eve is called ‘Silvester’ in German, lauf = run) but it was actually a few weeks ago, for reasons you can read about on their site.

It was my first-ever official run. The weather was utterly appalling – snow, sleet, rain and -5 through the day. I didn’t have a companion runner and by my start time of 17.30 it was already dark so I told my husband and kids to skip it and stay warm and dry at home. And, I guess maybe that’s what I’ve come to love about Zurich. I know it well enough that I can head into town after dark on a shitty day and run 10km by myself and feel like I’m ‘part’ of something.

Another lone-runner asked me to snap a finishing pic of her so I got her to return the favour. I wished I’d given her a hug, or at least a high-five. But that’s quite Zurich too – people aren’t all up in your shit. There was no participator medal given at the end, just the standard bottle of Swiss fizzy drink Rivella. I slushed home through the city, soaked to the skin and on a huge high.

So here’s to another big year of my life in Switzerland doing and seeing things that surprise and impress me all the time. Love Switzerland. Love Zurich. Roll on 2018! 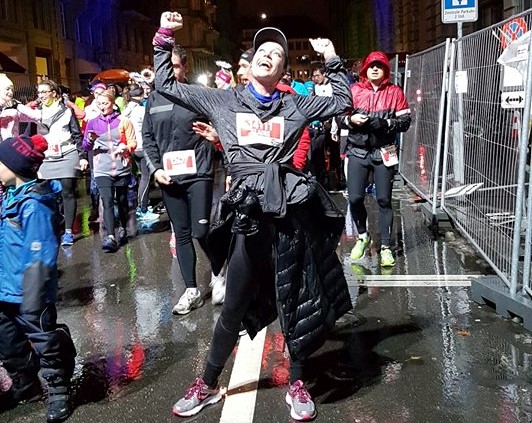 AND THAT’S A WRAP PEOPLE: I have achieved my self-imposed project of visiting every canton in Switzerland in 2017!! I must be insane. But I feel a huge sense of achievement.

Thanks again to all my Clairevetica readers, whether you came for the poetry or the travelogues (or whatever else) and especially those who commented, encouraged and made suggestions both on and off the blog.

I’m going to take a bit of time in January to take stock of where it all goes next so you’ll be hearing from me again very soon.

I wasn’t too sure about today’s GloPoWriMo prompt: “to write a poem of ekphrasis — that is, a poem inspired by a work of art. But I’d also like to challenge you to base your poem on a very particular kind of art – the marginalia of medieval manuscripts.” But then I went into town to see the preparations for Sechseläuten and realised I was looking at this stuff IRL pretty much.