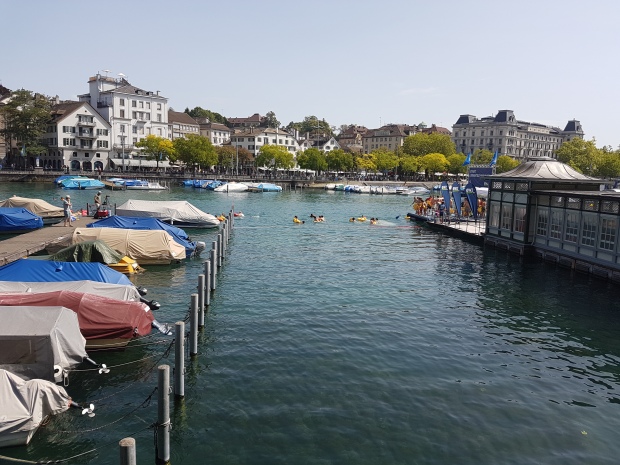 Green, green, green. It ripples and intensifies as I tumble and float down, ever down towards the bottom. Silvery light winks off my surface as the last of precious air bubbles leave me stranded to my fate, coming to rest on soft, subaquatic mud. Far above me, the constant crack and crash of bodies breaking the surface, churning and frothing as they flail and move. The sunlight pales to shades of clear green-glass up there but down where I now reside, the colours are deep jade and juniper, yellow-brown, kelp, burnt carmine and darkest black-brown.

A wavering blue sky can be seen in the rare moments of calm. Are those clouds? I’m swimming with the fishes but I’m stuck, staring upwards, as they, uncurious glide by. The edge of the pier is a fixed thing, noir wood, grooved and channelled with age and the erosion of the current; weeds and algae both etching away and adding layers; old metal, the blood-tinge of rust and the dull shine of it as the water slops and curls, constant.

Cheerful yellow bodies of blow-up hippopotami smack down and float, accompanied by red buoys of waterproof bags and pale – mostly pale – legs as they kick and drag. The current takes them all away. Occasionally a companion piece makes its way down to me, spinning lazily – a sodden pink sunhat, a ring of keys that could open bank vaults. Maybe. Our real-world value counts for naught now.

Eventually, after hours of commotion, the boil and scramble of bodies and spume calms and the white, barnacle-speckled hulls of three boats move away. I’m left here, softly blinking my messages to the fish. As night falls, the light changes, winks off and on, shafts shining through floorboards. I think I hear music, laughter but it’s another world away. I have words to impart but my Barbus companions cannot or will not read them. Later still, a deeper hush falls and the moon dapples softly on liquid contours above.  Asleep still-moving fish float while weeds drape and sway, crustaceans go to work. Cold and quiet, but never quite silent, nor still.

Dawn breaks and it’s overcast: soft grey light barely penetrating the surface. The webbed feet of ducks and swans, an occasional myopic eye searching only the warm upper layers for prey. Sun breaks through, piercing down to us nether-dwellers occasionally on a lucky beam, but not often. I sit and blink, feeling my life’s energy draining away. Rain dimples the meniscus. I think. It’s hard to tell. Almost certainly, all is lost.

But, what’s this, a flippered foot? In a single plunge, her sleek dark shape streaks down to pluck me up, hesitating only to acquire a second prize – a shell-encrusted pair of sunglasses that had made this ground its home for far longer than I. And then I am restored. Heat. Light. A babble of voices. The touch of human fingertips. Warm breath on my skin. Alive! 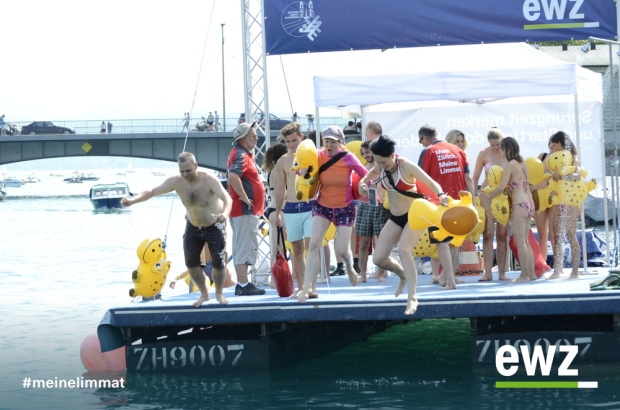 You see the phone flying up to pass over my head here… !

My smartphone spent a night at the bottom of the Limmat River in central Zurich after I stupidly lost it jumping in for the annual Limmatschwimmen on Saturday. (I wrote about the Limmatschwimmen event last year). The phone has now been restored, fully operational, thanks to the hardy diver-women who work at the Frauenbad.  Vielen Dank! #LoveZurich

It’s very quiet in central Zurich on a Sunday. Especially if you’re out early, as I was this weekend. Around the lake, there’s a bit of activity. A few tourist buses, people catching ferries, joggers, dog walkers and a few people fishing.

I had a wander around the top of the lake on the Enge side – the West side of the Zurichsee, also known as the Silver Coast. I haven’t really been over there before. It’s a bit quieter and more residential than the opposite bank – the Gold Coast. But there’s Seebads (lake swimming areas) and rowing clubs on both sides. And nice looking restaurants / sail club type places too.

I didn’t go very far though, because I had spotted something interesting to explore at the top of the lake. A little estuary that weaves its way through central Zurich. It’s called the Schanzengraben – and a quick bout of internet research tells me it’s actually an ancient moat – part of the city’s fortifications dating from 1642.

Nowadays it’s a very quiet spot – a clear green stream rushing smoothly through town. Walkways on both sides (mostly) that dip down to below water-level underneath some of the bridges, so you’re walking shoulder to shoulder with the flow. Some bits have a wooden boardwalk or smooth stone walkway that’s almost at the same level as the water. Because it’s Switzerland, there’s no fence or anything.

I didn’t see many other people – a few dog walkers and a couple of lost-looking Japanese toursists. All the shops in Zurich are closed on Sundays, which means Bahnhofstrasse goes from one of the most expensive retail strips in the world to a ghost town. As for foliage-clad 17th century moats nearby… they’re even emptier.

I didn’t really know where I was going but I knew the general direction. And I’ve seen the top of the river Sihl from the train so I guessed I’d come out somewhere familiar. And I did, one block away from the Hauptbahnhof. 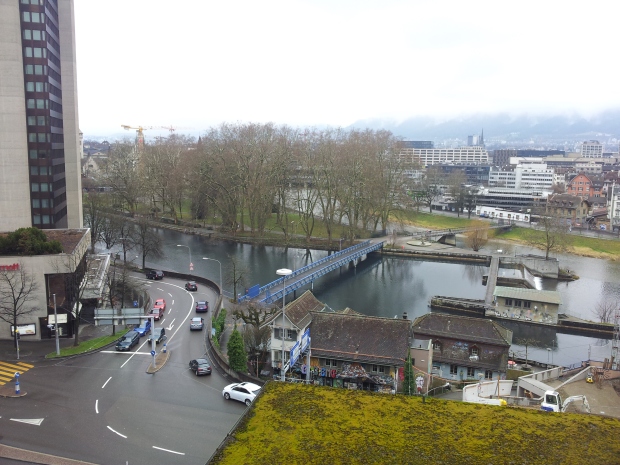 Do you remember the Wood Between Worlds that appeared in the somewhat odd prequel to The Lion, The Witch & The Wardrobe? It was a place of limbo, not good, not bad but somehow terrifying in its lassitude-inducing neutrality. A place to pass through that one could end up being stuck in if not careful. I’ve always tried to move forward but there’s been a lot of uncertainty in the past year or so since this Swiss move was mooted.

Being caught between two worlds and waiting for decisions to be made, most of which have been out of my hands, is enervating – something well captured in TWBW (The book is called The Magician’s Nephew by the way). But now I am in the final stages – staying in a serviced apartment in Kreis 6, perched high above the spot where Zurich’s two rivers, the Limmat and the Sihl, converge. The imagery is apt, of course.

This week I will finally make a loud and definite splashdown into the pond marked “Zurich”, moving into a proper apartment and commencing a real, full-blooded life in this city. I can’t wait.

That said, I hope I haven’t been riding the uncertainty so long that I’ve got used to the enforced laziness and non-commitment of TWBW halfway point.

I wrote that yesterday and today I jumped into a strange new puddle – the Swiss nursery that P will attend three days a week from now. Until I was there, I don’t think I’d quite realised the magnitude of the change we’re imposing on him. I know he’ll be OK but it’s kind of heartbreaking to see him unable to communicate with other kids and being only half understood by the one adult there who speaks English. On the plus side, she dresses like a sort of 80s heavy-metal girlfriend reinterpreted for 2014, which I can only thoroughly approve of.

Oh well… only time will tell.  I’ve just heard our stuff is arriving from the UK tomorrow so I guess this is it.  So, in conclusion to this stage of my life, let me paraphrase Dr Seuss’s Oh The Places You’ll Go (one of P’s favourites):

The Waiting Place is a most useless place... It’s time to escape all that waiting and staying — to find the bright places where Boom Bands are playing.