I am the watcher 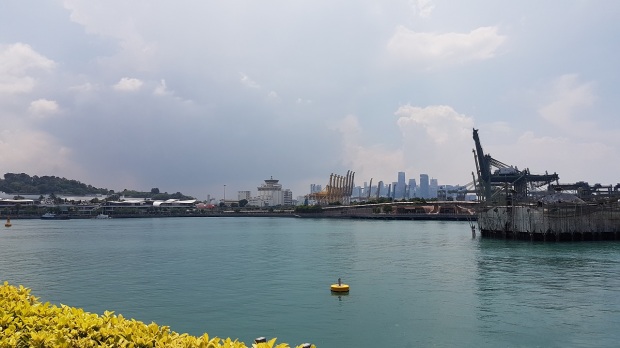 the earth will take back

in heat and ordure

they take back the dirt

one insect footstep at a time while

and seagullpigeons in rubber bonnets

that rubbish-island in the sea

the size of New South Wales

(because it’s bigger than Texas now)

– must be terra nullius for them

This poem was inspired by the novel Arkady (need to get back to polishing up my own dystopian story one of these days!) And also somehow by Singapore (pictured), a place where the lush fecundity of nature mashes with the nasty detritus and pollution of human industry.

The earth is sad / Standing in the purple rain

Fracking for those last drops of oil / Let’s go crazy

An island of plastic bags in the sea / Would you run to me if somebody hurt you, even if that somebody was me?

Disappearing whales, gorillas, tigers, bees… / Believe it or not, I started to worry

And we fight about gay marriage / Can’t we just let love decide?

We could drop the coal, the nuclear. Use wind and solar / Overcast days never turned me on

Things have got to change. Faster / You’ve got the horn so why don’t you blow it?

We’ve only got this one planet / Nothing compares 2 U

Today’s National/Global Poetry Writing Month prompt/challenge was to write a poem for Earth Day but I wanted to acknowledge the death of the great musician Prince, whose music has been around as long as I remember, and is an artist Himself and I really bonded over (among others). So I’ve done a cleave poem – a poem in two halves which can be read as two separate but totally different poems, while read together they form a third poem.